It's already two years ago today since I launched SamuTale into early access. The game had some major updates in the last two years and lots of cool things have been added so far. The early access season had a very rough start with a game world that was just too small and lots of critical bugs I needed to tackle. New content was added including fishing, a land claiming system, rideable horses, bow shooting and of course the major 'new world' update which gave the game world a massive overhaul.

To celebrate the two years of SamuTale I decided to offer a free-to-play week which will start as of now! It will run until the 23rd of September 2018 and offers full game access for everyone including non-founders. Like the game? Buy one of our founder packs with a limited time 30% discount and continue to play after it. (Sale will run until the 23rd as well). 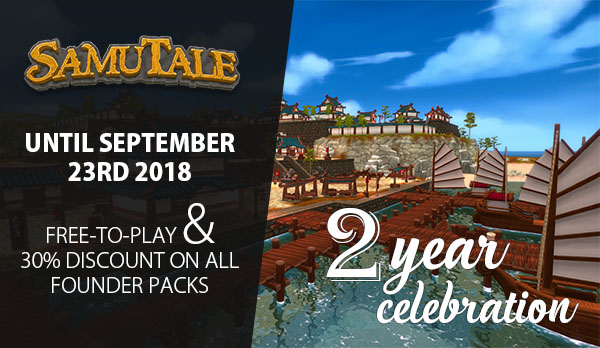 With this celebration also comes a brand new update. I know it has been quiet for a bit too long but patch 0.1.3 has just been released! I made lots of improvements including keybinding options, movement animations that are weapon specific, landing animations, weapon sheathing animations, dynamic footstep sound system, water particle effects, new water with reflections, new camera effects and lots of bug fixes and improvements. With 0.1.3 finally launched I can continue working on the livestock update that will bring breedable animals to SamuTale!

So founder or not, come and try out the game for free for a limited time!

Thank you for the support, much appreciated!

Client should be working again now!

Good looking game. I support it!